Ok, let me just start by saying that I am not a fleece person. I planned to try this jacket out with low expectations- thought I’d probably exchange for a moto.

But when I received it, I was impressed. The color for me is perfect (forest green). The fabric is amazing, it feels nothing like the Patagucci stuff some friends of mine love. It is kind of spongy and it *breathes*. I use it to bike commute, and can keep wearing it all day. I don’t have problems with pilling. Oh, and the zippers mean I’m not paranoid about losing things.

I thought the piping would make it weird, but it actually makes the jacket. I think it gives it a hint of a fifties design vibe… but on an outdoorsy jacket. (But maybe that is just me.)

Unlike the cropped moto, it covers my butt (unsurprisingly). Which means it stays warm. I actually think a more structured cropped version would be adorable, but that’s not the point of this cozy jacket. It’s a tiny bit unstructured, but I think that’s to be expected. I wouldn’t wear it to the opera, or to a rock show, but to lunch at a restaurant? Sure. Maybe because I opted for a medium instead of a large. (I could wear either.)

Some flaws, in my eyes:
Love the neck- but the zipper can be a little pokey.
I’m paranoid about stretching out the pockets with my phone. Or poking through with my keys. Irrational? Maybe, but I’d feel better if they were reinforced.
I wish there were thumb holes, constantly.
The elastic on the wrists is really tight. I can’t wear any thing under them or it cuts off circulation a bit. Even cotton woven fingerless gloves. Fine on its own, but I would like the option of gloves.

Overall-because of the price, I hemmed and hawed until the return window was closed. I don’t regret it. I have worn this almost every day of the cold San Francisco winter (which isn’t a Midwest winter or anything). It keeps me warm in my drafty Victorian building. I get a surprising number of compliments on it when I wear it outside.

Maybe one day I will trade it out for a moto, but I have grown pretty darn attached. I’ve had it for two+ months now.

So there you go. Considering an elevated fleece? Do it. 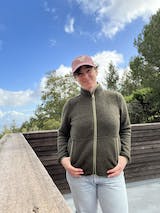 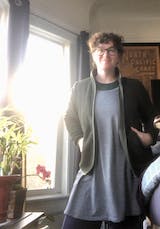 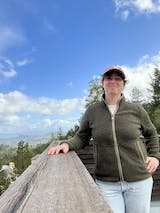 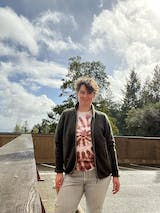 I absolutely LOVED this jacket. But when it was zipped up and I sat down the bottom of the zipper poked. And when it was unzipped the top of the zipper poked my chin line on both sides. I examined the zipper and I feel that over time the zipper will not hold up or get any more comfortable. So I'm going to return it. For the price it needs to suit me PERFECTLY. Also: I feel it runs a little big. The medium looked dowdy. The small fit perfectly. If you change the zipper to a better one I'll happily purchase again!!

This jacket is really cozy and surprisingly so warm for being not that thick. It's nice to have a very warm, but not bulky, jacket! Fits true to size and I can wear a sweater underneath.

This fits beautifully with just enough ease to wear it over another sweater, the chestnut color is a gorgeous neutral that goes with most everything. My one beef with this is how much it pills and makes little fluff balls along my arms and sides of my body. I have a small hamster's worth of fluff after only 4 hours! That said, I understand the nature of wool fleece and expect that there will be fewer and fewer fluff balls over time. I hope!

I love this jacket! I got caught in the rain and was surprised how dry it kept me. It is warm and cozy and fits true to size. I find the pockets to be oddly located (too high) and not comfortable for putting my hands in. I wish the pocket zippers were angled. When I sit down, the main center zipper pooches out weird due to stiffness. That being said, I still have been wearing it both around the house and to work most days!!